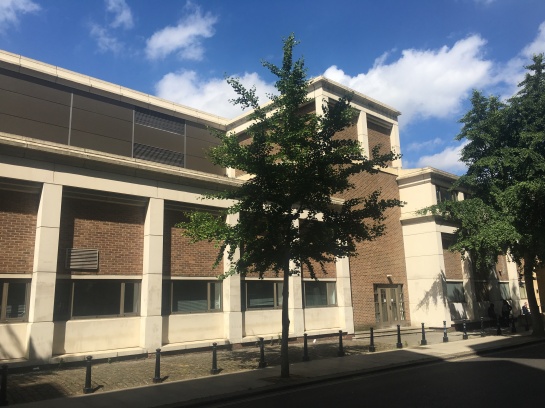 I was unsure of what to expect before starting Jury service. Full of apprehension and excitement, with only a superficial (cinematic) understanding of the process, I became part of the judicial mechanism. What I wasn’t ready for, was how fascinating and terrifying I’d find the spatial and performative design of the institution of law.

Geoff Manaugh observes that burglars have a spatial superpower; they are the ‘dark wizards’ of our cities. If this is the case, then the Crown Court is the mechanism to disrupt and strip them of this superpower. An architecture in a Foucauldian struggle to reassign power in a carefully crafted dance of people, spaces, histories and futures. A space and programme that is carefully crafted in order to ‘concretise’ an image of fairness; a materialisation, in bricks, mortar, oak panelling and cheap commercial furniture, aimed to facilitate (supposed) neutrality.

On entering the Crown Court, through the metal detectors, searches and instances of liquid consumption (sipping water bottles and coffee cups to demonstrate that they contain neither acid or explosive), we were herded upstairs through a private stairwell to the Jury Assembly. The room felt like a cheap, provincial airport waiting lounge with no destination; a room of such extreme blandness; a bureaucratic purgatorium where we were briefed; a temporal crossing where we waited and made decisions on a variety of cases and futures. This bland, architectural no-man’s land was my home for two weeks.

Over the last few years at Goldsmiths, I’ve seen and encouraged a fascinating trend towards an engagement with performance. Within other disciplines (and in design theory) this has been called the ‘performative turn‘, but I’ll leave it to others, far more rigorous than I, to explain the theoretical genesis.

What I’d like to do is show a few projects and talk about their implications on design practice. I’ll also try to make initial steps in trying to connect design to contemporary art practice.

Performance has always played an important role in design (I’m not talking about performance in terms of functional efficiency). The communication of a project – be it in front of a client, a peer group, conference audience or general public, requires a level of performance. How the story behind a project is constructed and told makes an enormous difference to its reception. I’ve always encouraged my students to embrace the performative nature of project crits and presentations. If you design, direct, practice and perform your presentations you’ll go far. It’s a skill, that if mastered, will make you invaluable to a design consultancy.

Last year, with our second year students, I developed a brief with Nelly Ben Hayoun (you can read Nelly’s write up of it here) to push the performative/experiential part of our student’s design practice. It was a called The Forbidden Tourist:

In William Burroughs’ text The Invisible Generation he describes hidden operators, agents of change and design that sit behind the scenes forumulating and curating new events, experiences and interactions. Acting as the “Invisible Generation”, this week you are tasked to create ‘domesticated events’ in which tourists will be invited to experience new forms of landscape / sports activity / warmth / environment / diet / language / beach / sound / inhabitants etc…

The final presentations had to be ‘live and real’, performed, experienced and directed. The project was a great success with some fantastic ideas. One of the most important things I learnt throughout the process was that through ‘performing’ ideas – including getting members of the audience involved – it was evident whether or not the experience/idea/design would be valuable, exciting or intriguing. During the presentations, you could instantly tell if the project was a success. In some ways this combines presentation with a form of fictional user testing, they were performing to know. Here, prototyping is taken to another level, where ideas are exposed to an audience, events are ‘acted out’ and success is evaluated. Performance as a prototyping medium.

In this example, performance is placed at the end of the design process, where an object, service or experience is performed to convince an audience of it’s validity.

In the act of designing we set up certain behavioural trajectories, these have been described as ‘scripts’ by Madeline Akrich. Implicit in every ‘technical object’ is a set of assumptions (or predictions) of how a ‘user’ will behave and what ‘specific tastes, competencies, motives, aspirations, political prejudices’ an actor has through their agency in the world. What we need to be aware of is how this ‘inscribing’ takes place and the extent of influence a designer has over the inscription process. So by performing and prototyping the behavioural and social relations intended in a design, the designer can start to gain insight on the process.

If we abstract the ‘script’ from the object and focus purely on the social interaction, we have something close to the work of Tino Sehgal. His dematerialised approach to his art practice means that he makes ‘constructed situations’ – live events where ‘interpretors’ are given oral instructions by Sehgal and the event unfolds beyond his direct control. The work lives only in the memory of those that witnessed the event and in the media reaction to it. His current piece, in the Tate’s turbine hall, These associations, is well worth a visit. The work consists of a group of 70 volunteers walking, running, singing and playing. They move around the space as if they follow an untold set of rules and instructions, every now and again one of the participants breaks off to tell a member of the public a story. During my two visits I had a man tell me about the time he lived in a house boat on the Thames, a really close community, where once he fell into the river and nearly drowned. The other story was from an American woman who told me about her recent experience at the Olympics, and how hearing the national anthem uncovered a lost sense of national pride.

I love the work, it feels awkward and strange, familiar and uplifting. When listening to the stories, I was genuinely interested, when watching the movements of the crowd I was confused and amused. I like the fact that I’m currently participating in the work right now: my text is part of a network of appraisal that constructs the media memory of a fleeting work of art. In terms of its relationship to design, I feel it fits perfectly. As designers we set up frameworks of action, then the messy reality of people shift and change our intensions – this is akin to Sehgal giving instructions, the allowing the work to evolve throughout its life.

It reminds me of a piece of work by Matt House and Martin Turner, for their final presentation, in response to a live brief set by Imagination, they designed a ‘rain dance’. In this project, the performance is both outcome and communication, it’s a way to express the essence of their idea, but it is also a proposal for a possible solution – a physical jingle to promote the appreciation of the British weather. Like a meme it’s released into the world to change and effect peoples attitude. It is through performance that we see the world change.

I’m also interested in how designers use performance as both a critical and generative tool. This year we had two great third year projects exploring ‘performance as method’. Larissa Seilern investigated how the ‘performative act’ could be used to ‘interrogate specific social phenomena and potentially instigate social change.’. In the video she tried to normalise the media view of beauty in the context of the streets of south east London. The activity calls into question the representations of women within advertising, but beyond that it allowed for Larissa to evolve her ideas and understanding of a space and topic.

The other project, Micro-rituals by Tom Marriot, elevates everyday action through video recording into  a performance to be used as a resource for design. Here, performance is integral to the design process. By isolating, editing and remixing banal activities into the beautiful and ridiculous, Tom unearths a rich seam of material to work with. His method looks to deconstruct the everyday in order to reveal the extraordinary. The performance is less in the ‘acting up’, but more in the editing of action.

This reminds me of George Perec’s idea of the Infra-ordinary:

The daily papers talk about everything except the daily. The papers annoy me, they teach me nothing. What they recount doesn’t concern me, doesn’t ask me questions and doesn’t answer the questions I ask or would like to ask.

What’s really going on, what we’re experiencing, the rest, all the rest, where is it? How should we take account of, question, describe what happens every day and recurs every day: the banal, the quotidian, the obvious, the common, the ordinary, the infra-ordinary, the background noise, the habitual?

Georges Perec, Approaches to What? 1973

This is where performance comes into it’s own, it acts like a mirror to the actions, relationships and events that make up our daily lives. It gives us the necessary distance to examine, reflect and understand what we do and why… surely a useful activity for design and designers.