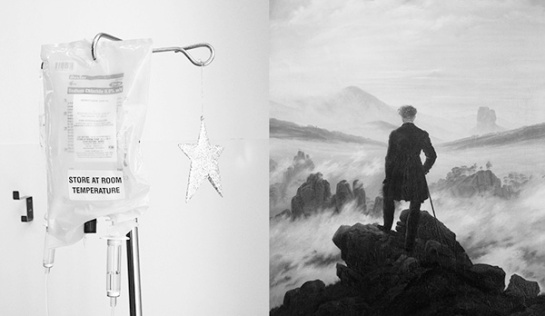 This time two years ago I was sat in the Oncology lounge of Watford General Hospital waiting for my Dad to receive his first dose of chemotherapy. It struck me then, a feeling I still can’t shake, that the number of discrete decisions, actions, objects and processes that converged on that moment of time defied understanding: the eternal human endeavour to survive meets the unknowable complexity of a system on the brink of collapse.

I’ve begun to think of this feeling as a form of the infrastructural sublimity; standing on the edge of a complex human and non-human system so in awe of its complexity, that one becomes overwhelmed with both fear and hope.

As we waited there, for a bespoke mix of chemicals to be made, by a highly trained set of people, to be administered by a kind and caring nurse, in a space designed (in all its material complexity) to give comfort and reassurance, with a set of tailored objects designed to give relief of specific diseases, all free on the point of access, through a massive system of taxation, wealth distribution and public health care, to act on the out-of-control cells in my father’s lungs, I was in awe of what humanity had achieved.

I have come away trying to fathom how we (designers) start to navigate, mediate or manipulate these impossibly complex and messy infrastructures. Is this just a form of dark matter, that we need to find the correct instruments to detect, measure and affect change through? How do we model, prototype and predict the consequences of our actions? How do we not lie down in the face of such complexity and give up?

Our first difficulty arises when we try to ‘understand’ the scale and complexity of the systems we face; instead of creating a ‘children’s book version of reality’, we need to map the extent of the network, to chart all the access points and actors in order to make sense of the relationships that are forged within the messy complexities of our socio-technical systems. But even the act of mapping or diagramatising these infrastructures is difficult enough.

This can be broken into two main problems; the issue of representation (or the gap between the map and the territory) and the problem of truncation (or falling off the edge of the map).

Like the 17th Century portolano makers, the difficulty found in the art of cartography has been fully explored. Problems of ‘truth’ within our systems of representation has been interrogated by scholars (see Denis Wood’s The Power of Maps), and the power relations written into cartographic systems have been uncovered. Whether through the issue of selection (what is included or left off the map), language (the codification system used to symbolise reality) or projection system (the ever present problem of converting 3D objects into 2D representations), drawing a map has its own discrete set of politics that are difficult to navigate. We all know that Cartography is an act of colonisation, through the drawing of borders we define identities and write laws. So when we begin to evaluate ‘where’ to act within a system, we must first need to ‘understand’ through drawing out the spaces of agency.

One of the key moments in mapping is knowing when to stop. If we pay heed to a Latourian sense of interconnectedness, then our actions as designers are linked to a growing network of human and non-human actors. Where do we draw the line, when do we turn our heads away from the page and decide to act. With our students, this can be seen in the compulsion to ‘research more’ to make more and more connections, until they have a full picture of the situation. But sadly, this is reminiscent of the Borgesian Map, where the act of cartography becomes so obsessively detailed it is eventually abandoned and lies in useless tatters on the borderlands of efficacy. As designers we need to make the leap into the material unknown.

Design and the articles of change
Once we have mapped our territory and unpacked the web of human and non-human relationships, we then need to identify our place to act. In service design these are often called ‘touch points’, but I don’t really like this term, it bases it too neatly in the material domain of ‘the user’ or (more sinisterly) ‘the consumer’. I want to identify the sites of concentrated agency, the material and non-material actors that can affect change. It’s here that we find our place of design intervention. This is were a post-disciplinary design practice comes into its own; instead of trying to affect change through the medium of your training (web / product / graphic / interior etc), you move to place of action / the site that is pregnant with possibility and choose the tools necessary to be most affective.

I’m currently struggling with a book chapter titled; rapid prototyping politics. It’s for a Birkhauser publication on ‘Transformation Design’. In the piece I’m trying to highlight the necessary changes needed in design education to prepare students for this new type of design. The article explores the idea that through design we can prototype normally slow, large scale problems – such a policy implementation – in a rapid and agile fashion. I think there are many ways to ‘try out’ and prototype new forms of political and material engagement. Here, policy is transformed into the ‘object’ of design and experience design into the ‘randomised control trial’ to understand impact of your strategy.

As design expands beyond a purely material or functional role within society, we need to come to terms with the boundaries of our reach. How we re-conceptualise and build tools for change needs to be considered within an ethical framework. How to ‘reduce harm’ when we are trying to change the lives of people. How is ‘behaviour change’ (although I’m very sceptical about this whole field, but that’s for another post) understood within a positive, humanist approach to our discipline that doesn’t tie people to systems of consumption? How do we resist the feeling of uselessness when faced with the infrastructural sublime?